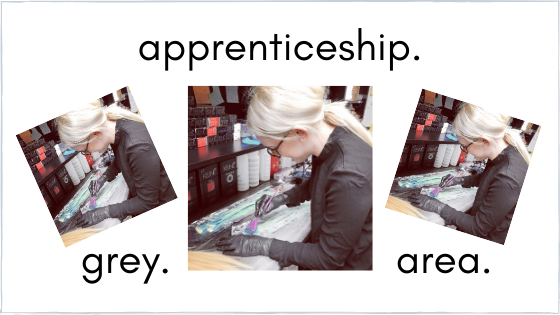 I thought I had a handle on the requirements of both the Apprentice and Sponsor in the Hairstyling Apprenticeship process.  Recently I had my eyes opened to some inconsistencies which allow some to fly under the radar and fast track the system.  I refrain from saying ‘cheat’ the system since most Apprentices do so with the consent and approval of their Sponsor and the ‘system’ itself.

For as long as I can remember, the apprenticeship process required both schooling and work hours.  Work hours are spent with a sponsoring Stylist who is required to teach and sign off on all the essentials skills in the apprenticeship handbook.  I’ve been through the process as the Apprentice and now as a Sponsor.

Imagine my surprise when registering my third apprentice discovering an entire ‘grey’ area I had not realized existed.

Hair styling is classified as a Compulsory Trade in Ontario. After completing the schooling and work hours mentioned above, it requires a final exam to become fully licensed. Traditionally, this is 1500 full time school hours, 2000 salon working hours, totalling 3500 hours.  The new part time Apprentice school program of 480 hours requires an additional 3020 salon working hours for the same 3500 hour total.  Seems simple enough right?  As long as 3500 hours are completed, regardless of the schooling path they choose, the hairstyling apprenticeship is fulfilled and they are able to take their final exam to become fully licensed.

Here’s where things get interesting.

‘Whenever I felt the apprentice was ready.’

The clarification I asked for didn’t exactly sit well with me; ‘No – she doesn’t really have to complete all the hours – just send her with a letter that says how many she completed and that you feel she is ready to take her exam’.  Well really. Where’s the consistency in that?

Just to clarify – PLEASE correct me if I am wrong.  I’ve sponsored may Stylists since this happened and to my knowledge things are still the same. Now with the Ontario College of Trades gearing down, my hope of a consistent system is less than before.  I would love to find out that this murky grey area I uncovered is but a bad dream and there is actually a concrete system to ensure every hairstyling apprenticeship requires exactly 35o0 hours to achieve full licensing.

Most of you that know me can clearly see I’m a black and white type of person.  At a fork in the road I will go left or right – I’m not into off roading down the middle, throwing caution to the wind to rip donuts in the mud. I realize not everyone is the same but here is what really bothers me about all this.

HOW is this fair to the apprentice and THE CLIENTS?

Why should one apprentice work a gruelling 3500 hours when the next one doesn’t have to? Why should one sponsor make the decision that an Apprentice has completed ‘enough’ hours when 3500 is the actual requirement? Why should a client have to question whether the newly licensed hairstylist you have an appointment with has in fact completed 3500 hours?

There are provinces where hair styling is not regulated at all.  You could go into a salon and book an appointment with a hair stylist who doesn’t have a license, which you may or may not be aware of.  In that situation you rely on the reputation of the salon you are going to, their education program and the quality of their work to know whether the stylist will serve you well.  Sadly, even though there are governing bodies for hairstyling apprenticeships in Ontario,

I encourage you as a consumer to do your homework.

Make your stylist choice based on more then just whether they hold their license.  Learn about their work, inquire about their training and education, ask who their Sponsoring Stylist was.  After all – finding a great Hairstylist is really about trust! Has your Hairstylist earned your trust?

We use cookies (small data files) to improve and personalize your experience and deliver tailored advertising to you both on and off our sites.  By using our sites you agree to our use of cookies.
Accept
Read more